Free shipping on orders over $200-

RELY ON YOUR BEST FRIENDS

Salewa's best in your Inbox *The field is mandatory. By submit I declare to have read and accepted the Privacy policy of Oberalp spa
Categories
Help
Information

“Spending time together in the mountains creates close and intensive relationships. The bond between you and your partner is almost like an umbilical cord.” This is how Roger Schäli describes the friendships forged during climbing. And this certainly applies to his friendship with Simon Gietl. Over the years, they’ve climbed many hard routes in the Alps together and been on expeditions all over the world. They’ve shared many extraordinary moments, and painful experiences. When Roger first approached Simon in 2018 with the idea for NORTH6, Simon had just completed his NORTH3 project – and his reaction was not exactly enthusiastic. “Roger’s idea was to link the six great north faces of the Alps that he completed as a winter project in 2008 – only in the shortest possible time and ‘by fair means’ only,” explains Simon. He adds with a grin: “At the time, I was so fed up with cycling that I wasn’t very positive about the project.” Nevertheless, the two climbers kept talking about NORTH6 – and finally decided to go for it in September 2021.

Due to the poor weather forecast and contrary to the original plan to start in France, the two alpinists and their team decided to first climb the Cima Grande/ Große Zinne (2,999 m) in South Tyrol. It’s a special place for them– and maybe a fitting starting point. Roger and Simon completed the first winter traverse of the Cima Grande together back in 2012. The experienced team climb the ‘Comici’ to reach the summit of what is the smallest of their six north faces and then abseil back down to jump on their bikes for two long and intensive stages. Some 334 kilometres and 3,720 vertical metres later, they’re standing in front of the Piz Badile, the second summit in their NORTH6.

Early in the morning the NORTH6 team set out from the Sasc Furä hut. With Roger leading the way, the pair take just three hours to climb the ‘Cassin’ route to the summit. After a short rest break, they head back down over the North Ridge to the foot of the face. The weather and fine conditions make it possible to fly the rest of the way down. Simon is delighted by how things are going: “I can hardly believe it – it went so smoothly on our second north face. And we were able to fly from the end of the North Ridge. That was amazing!” After a short break, the team heads on by bike over the Splügen Pass/ Passo dello Spluga to north wall number three. 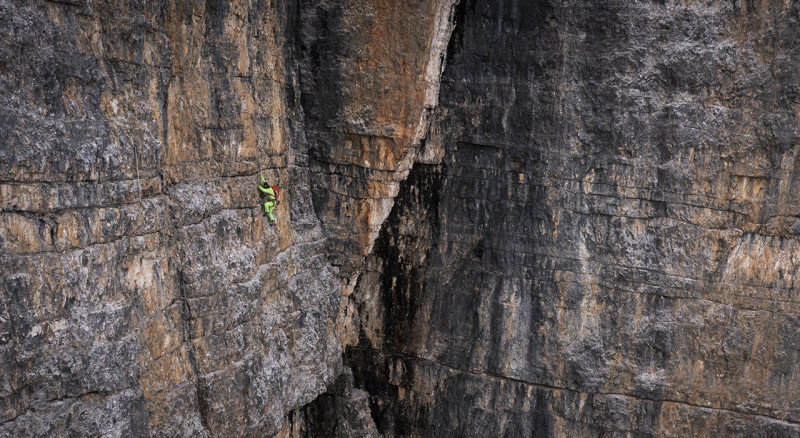 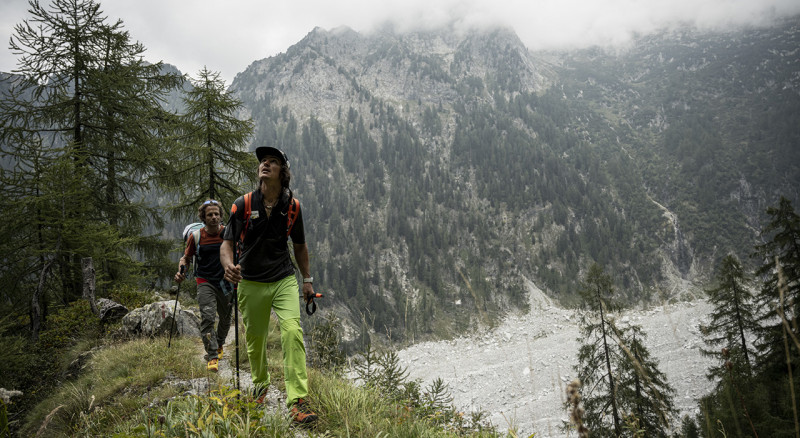 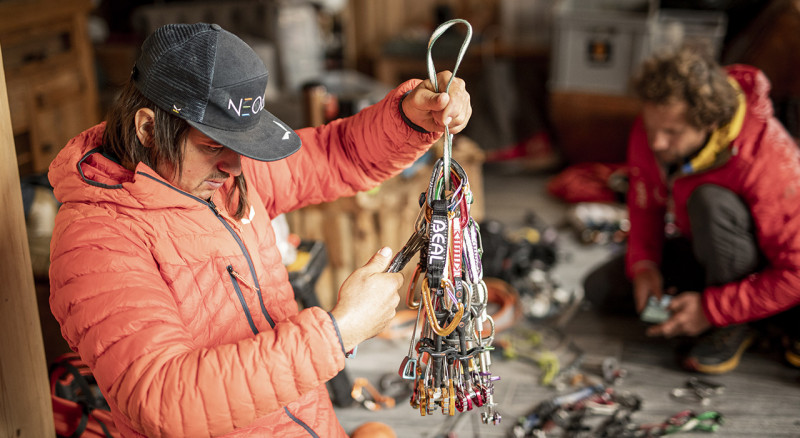 THE EIGER – AND GOOD WEATHER

Arriving in Grindelwald, there are only a few small clouds in the blue autumn sky. Simon and Roger are in fine spirits as they ride up to Kleine Scheidegg, from where they plan to climb the first pitches on the Eiger and then bivouac for the night. At five o’clock the next morning, they’re on the move again climbing with headlamps. With Simon leading, they climb the ‘Chant du Cygne’ and then head on up to the summit of the Eiger (3,967 m), which they reach at around 14:00 via the West Ridge. After a quick photo at the summit, they turn and head back down via the West Ridge. Upon reaching the “Mushroom”, they receive the all-clear to fly the rest of the way down from Lucien Caviezel, the paragliding expert on the team.

THE MATTERHORN – TIRED, BUT HAPPY

Back to grinding out the kilometres on two wheels. The team is headed for Zermatt, where their fourth north face awaits them. After some 183 kilometres and over 3,000 vertical metres, Roger and Simon find themselves looking up at the Matterhorn (4,478 m). However, a weather front has brought in bad weather with rain and snow, forcing the NORTH6 team to sit it out for a day. But even the poor conditions with fog and rain do little to dampen spirits and the following day the two friends reach the Hörnli hut. And then leave it again at six the next morning. Simon and Roger alternate leads on the ‘Schmid’ route. Fresh snow and spindrift makes the climbing more difficult than expected. At 18:00, they laugh and smile in relief as they stop for a summit photo and then descend via the Hörnli Ridge, where difficult conditions make for slow going. Tired and hungry, but very happy, they reach their base camp at the camp site in Täsch at two in the morning.

Back on the road bikes again, Roger and Simon set out to travel over into France with their team. It’s raining in Chamonix, which means there’s fresh snow from 2,000 metres up. After two days, they decide to make use of a brief period of good weather. In the early morning hours, they start up the North Couloir, and stand on the summit of the Petit Dru (3,733 m) 17 hours later. Describing the route in a voice message recorded at the Refuge de la Charpoua at half past one in the morning, having abseiled back down the South Face, Roger says: “The first pitches were really hard. Luckily Simon was rearing to go, despite the dark, the fog and the spindrift. On several occasions, we had to stop and wait for minutes at a time as snow poured down off the face and over us. They were difficult winter conditions on the Dru. But the ice was good and the descent via the South Face went ok.” 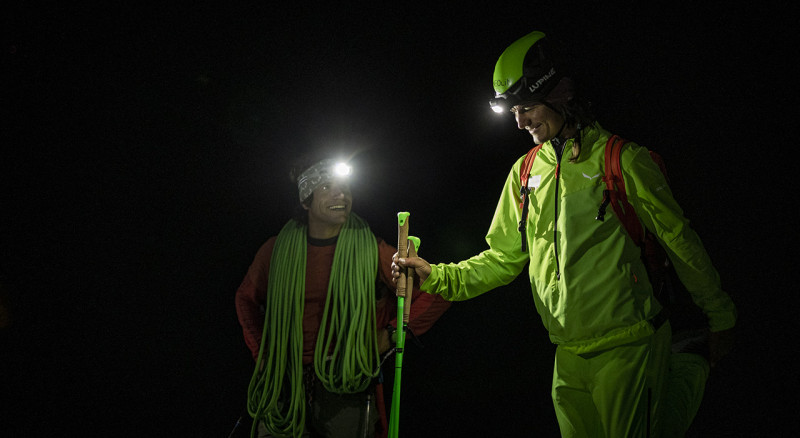 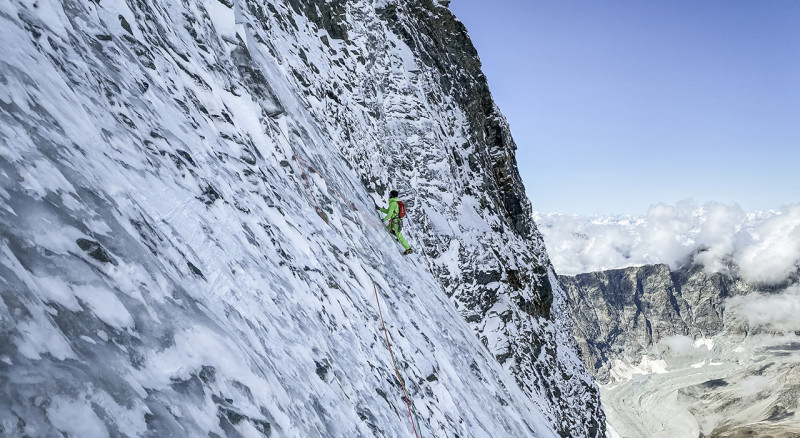 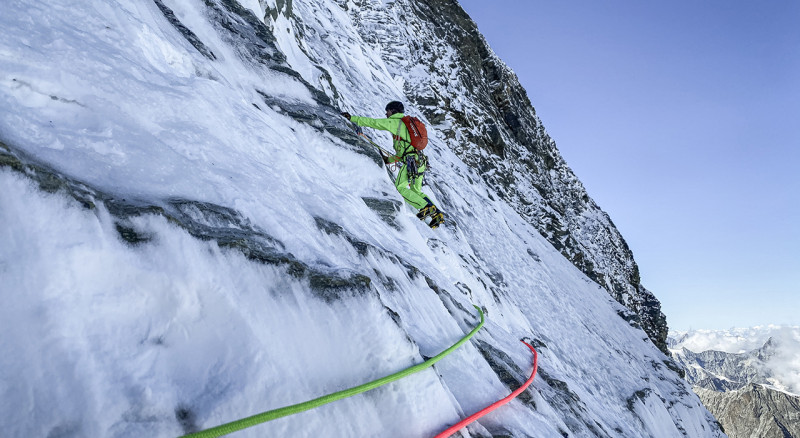 In the course of their mammoth NORTH6 project, Simon and Roger overcome some 31,000 metres of height ascent and cover more than 29,000 vertical metres of descent – by paraglider, abseil or on foot – and ride approximately 1,000 km by bike.
Roger Schäli regards NORTH6 as one of his most beautiful experiences in the mountains. “It’s not often that you get to share these kind of summit successes with so many close friends. You could really feel the unique power of all the positive energy.” Reflecting on the project, Simon Gietl describes it as: “A completely new dimension in terms of experiences, impressions and adventures,” and adds: “It’s an honour for me to climb with Roger and realise dreams like this together.”

After a short night with little sleep, there’s a welcome change in conditions as the two friends set out on the final stage of their project. The sun is shining and the thermals are favourable, so Simon and Roger decide to fly their wings down from the Refuge de la Charpoua (2,841 m) to the Mer de Glace. During the flight, they get a good look at their final hurdle in all its magnificent glory – the near vertical wall of the North Face of the Grandes Jorasses (4,208 m) in the Mont Blanc massif. After landing safely, they make their way up to the Refuge de Leschaux, and begin final preparations for the climb to the summit the following day. Their selected route is the ‘Direktes Leichentuch’. The initial pitches prove challenging. With 1,100 metres of vertical climbing behind them, they reach the final summit at three o’clock in the afternoon. And are overjoyed.